Good news for all the Samsung fans out there!

The company has started rolling out official Android 7.0 Nougat update to existing Galaxy S7 and Galaxy S7 Edge smartphones. Samsung says that the update brings some improvements and some new features to its current flagships that include…

One thoughtful change by Samsung is the change to display resolution. Though the S7 and S7 Edge support HD, Full HD and Wide Quad HD resolutions, post the OTA update, the device will default to a Full HD resolution. This doesn’t affect functionality but enables longer battery life. Users can still change the resolution to WQHD or HD according to their preference.

So, if you’re a Galaxy S7 or S7 Edge owner, rejoice. If your phone is one among the devices that Samsung has promised the OTA update for, be prepared to wait. On the other hand, if you have some other Samsung smartphone, go to XDA-Forums and get a Nougat Custom ROM. 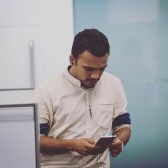 Addicted to music, gadgets, books and the internet. I love reading and, sometimes, I write. Get in touch for conversations over coffee! https://medium.com/@k3sava